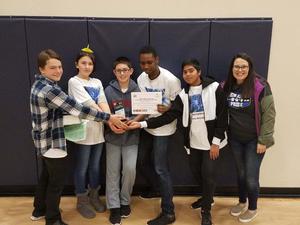 This weekend MCS had two teams competing in the First Lego League North Idaho Regional Qualifier Event. First Lego League is a Lego robotics competition that is held worldwide every year. The teams are judged based on their solution, research, and ability to analyze a problem that is presented with along with their ability to work together (the core values) and their unique robot design. In addition to being judged on those three things, they must also program their robot to complete “missions” for points. If the teams excel in all four areas they move on to the next level.

We had the “Satellites” with Joey, Skylla, Tommy, Graeme and Ashlee winning the Core Values Award. The core values award goes to the team that best represents the core values of the First Lego League Competition; discovery, innovation, impact, inclusion, teamwork and cooperation (competitive cooperation).

We also had the “Super Novas” with Ayden, Mark, Tate, Annabelle, Sadeed, and Daniel. Every year there is a new theme for the FLL Competition. This year was Into Orbit. Teams had to research and find a solution to improving the lives of astronauts that are in space for more than a year. The Super Novas won the Presentation Award for all of their hard work and research. They came up with an innovative way to help reduce the amount of sun radiation astronauts are exposed to while in space.

While we had both teams win awards, we are also having both teams moving on to the next level and attending the State Championship!!

The state competition will be held at the University of Idaho on Saturday, January 26th.

More information with times and location will be provided as we get closer to the date of the competition!