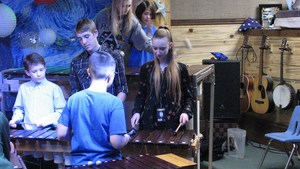 Marimba club conducts workshop for 13 students at Potlatch High School and taught them to play two Zimbabwean tunes on African Marimbas. The club then preformed a concert with the Potlatch students.

On Friday evening, February 16th, 2018, the Moscow Charter School Marimba Club did something they had never done before. Twelve members of the club conducted a workshop for 13 students in the Potlatch High School percussion class and taught them to play two Zimbabwean tunes on African marimbas…kids teaching kids. Following the workshop, sandwiches were provided by Potlatch Arts Council members for all the students. Then eighteen Marimba Club members performed a one-hour concert that included the two songs the Potlatch students had learned in the workshop.

The concert was videotaped by Brett Hogaboam, assisted by Rowan Hites and can be seen by clicking on this YouTube link: https://www.youtube.com/watch?v=8mhlbKknboE  About 85 appreciative audience members from the Moscow and Potlatch communities gave the group a standing ovation at the end of the concert. Marimba Club members expressed how they want to do this again in other local communities. Potlatch students totally enjoyed the event and even asked their teacher, Doug Richards, if he could get the school their own set of African Marimbas!

The entire event was first proposed by Sally Perrine, member of the Potlatch Arts Council, and was sponsored by the Latah County Arts and Culture Committee, Potlatch Arts Council, and Potlatch Jr. Sr. High School. Donations from all three of these groups, plus donations from ticket sales for the concert will go to the Marimba Club to use to fund other events like this one in other communities and to help cover costs for members to attend Zimfest (Zimbabwean Music Festival) in Monmouth, OR in August.